I thought this year was going to be better......

Well things don't seem to be going in that direction....
I welcomed 2014 with open arms. I was ready for the past year to be over and behind me. To quote a friend..."Be nice to us 2014." This was exactly what my heart was screaming. The past year seemed to be one full of trials not only for myself, but for many of my friends as well. Miscarriages, death, chronic illness, divorce, addiction.... just to name a few.
I had high hopes for you 2014....

And then the feeling of impending doom crept in.....
I was released from my church calling and was quite dissappointed. I loved it and I was finally getting the hang of it. But I was fine. When they released me, I was told they weren't going to give me a calling right away. Give me a little 'break' since I just had a baby. I was like, hmmm ok, that sounds nice. But then I thought about it some more and wondered why?
Impending doom..... remember.
I got this feeling like I was being given a 'break' because this year was going to be another hard one. And I panicked!!! I was letting it consume me and it was ridiculous because it was all just in my head.
But when I had my last miscarriage I got the same feeling.

Maybe I have super powers and I can see the future, Bahahaha.
If only I could've seen what was coming.... If only. 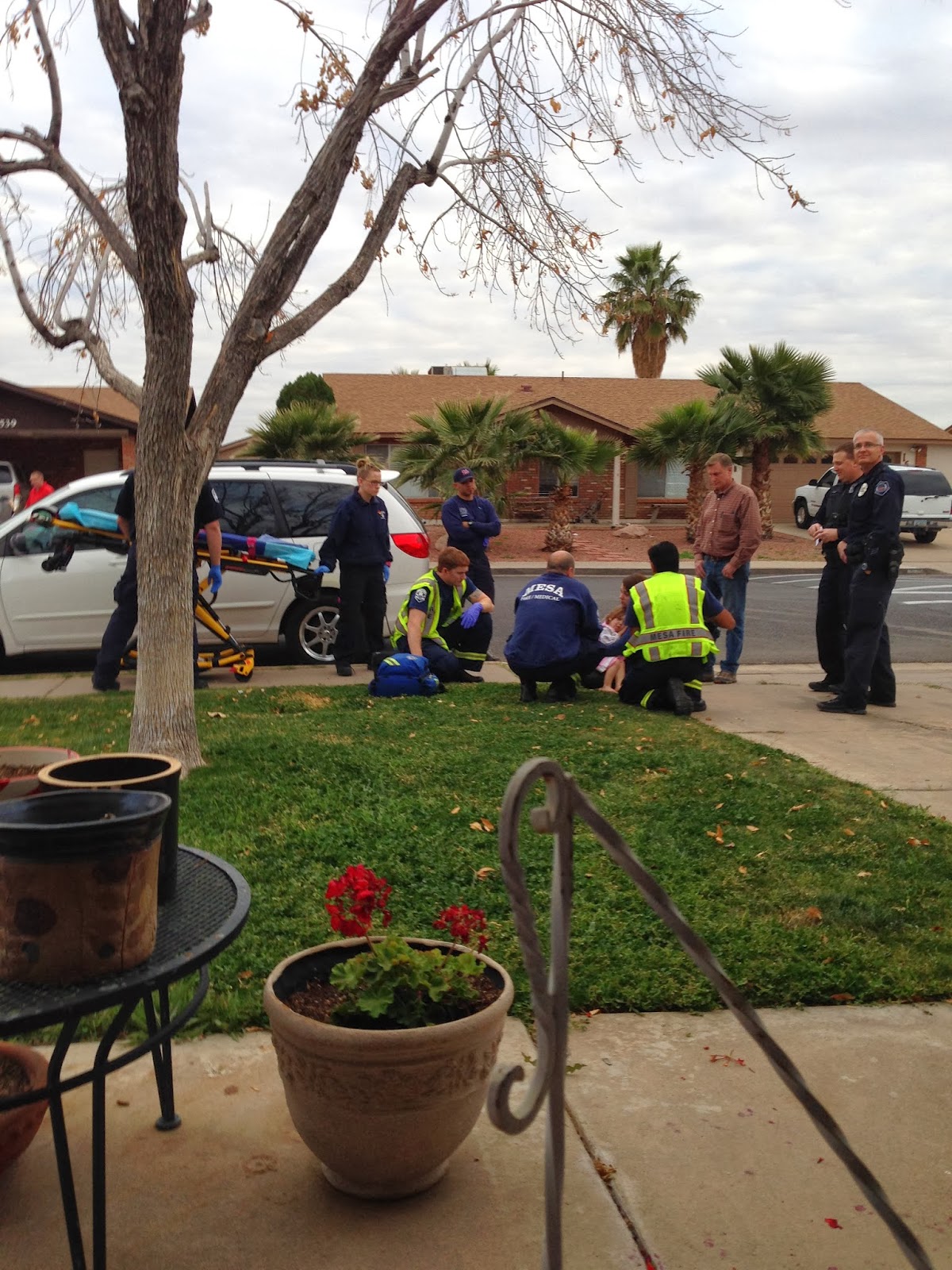 Every parents worst nightmare.....
Have you ever had that feeling of your life going in slow motion, as you watch the horrors occurring right in front of you?
That was me today.
I watched, in slow motion, my daughter run in front of a moving truck and her tiny body get smashed by it's front fender and then fly about ten feet scraping the pavement as she went.

My insides screaming at the nightmare that just happened. My brain accusing my eyes of being liars.

I couldn't stop it.

Why couldn't this be just another horrible dream that I would soon wake up from?

It was all such a blur. At yet so vivid at the same time.
I'm just so grateful that she's ok. It could have easily been so much worse.... but it wasn't.

There were kids all outside playing in the front yards. We were watching the kids, standing right there. We had just talked about how our kids freak us out when they try to bolt into the street. A few got yelled at and threatened for trying to attempt it. In that moment we were getting ready to go inside, then I watched Claire go for the street. I screamed... STOP!! But it was too late.

I tried to run to block it and turn away from watching at the same time. I couldn't stop her from being hit. I couldn't watch her body get smashed.
I heard the loud thump and watched her body get rocked by the blow. I watched helplessly while she skid across the asphalt just imagining the injuries this tiny person could be sustaining.
It was one of the worst things I have ever witnessed in my entire life.

I ran to her and scooped her in my arms..... I shouldn't have moved her.... but my brain was still trying to catch up and process all that had just happened. I felt like a chicken with it's head cut off, running around in circles not knowing what to do.
All my mind could come up with was....
WHAT SHOULD I DO?!!
I finally think.... 'call 911!' and 'put her down, stupid, you shouldn't have moved her'
I set her down in the grass. Her eyes roll back and she's trying so hard to focus. You can tell she is so dizzy and rocked. I see a mark forming on her head. I scream at the house call 911!  I lay Claire back and run to the door and scream inside call 911! I hear my friend yelling the same thing. She's already on it. I go back to Claire and the driver is by her. We are a hot mess and looking Claire over trying to see if she's bleeding or misshapen in any way. I fear she's laying there dying. The driver just starts sobbing.... I know she's thinking the same thing. We are both sobbing. I grab her and hug her and tell her it's not her fault. It's going to be ok. She hugs me back and we cry... waiting. A policemen on a motorcycle pulls up. It seems like hours but only seconds have passed since the accident.
More people show up. A lot is going on. A lot happened all at once. They checked her. She's just screaming and clinging to me, saying I don't want to see a doctor. She seems ok other than a few bumps. The ambulance shows up. They say there is no major urgency if we would like to just take her in ourselves. My brain is screaming at me HOW CAN SHE BE OK?! I just look around at the people surrounding me not knowing what to do or say. After more discussion I finally decide to take her in myself. Everyone makes sure I'm ok and they pack up and are gone in a flash. The police stay and take my statement. I'm holding a still screaming Claire. Chase shows up. He was working and I didn't think he would be able to get off, but he was there. In fact, I didn't even know he was called. He takes Claire.
The driver comes over and we cling to each other and sob. We are so glad that she's ok.
We are both mom's who just experienced a mother's worst nightmare together.
I'm so grateful that she was the driver. That she was paying attention. That she was driving slow because of all the kids. That she was able to slam on her breaks fast enough. That she was so kind and caring.

We gave Claire a priesthood blessing and then took her to the ER so she could get her head scanned.
She ate and drank and watched cartoons. She bossed the nurses and doctors around... "check my heartbeat" "check my eyes"
The scan came back ok.
We are home and safe.
She has a bump on her face right by her eye and a few small scratches and bruises.
It could have been so much worse.
I feel so blessed that it wasn't.
I am still so amazed at how little she walked away with.
I'm still in shock.
I'm still crying.
I'm hoping that this will be the last that 2014 will throw at us.
Please,
for my sanity and for my children,
please let this be the worst of it. 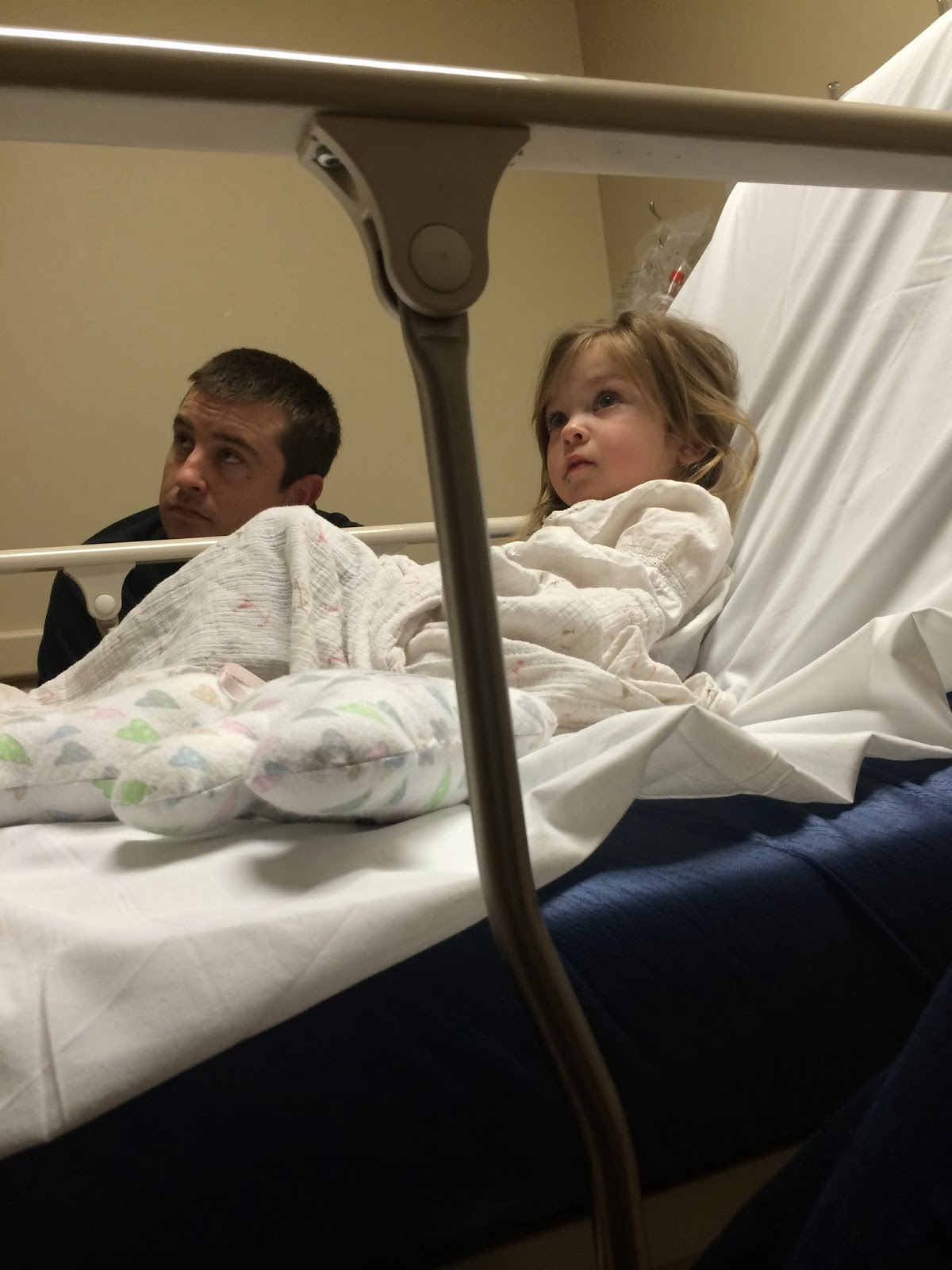 Chillin' with Daddy at the hospital he works at.

Not even a truck could keep this little power house down.
She's amazing.
I want to be strong like Claire. 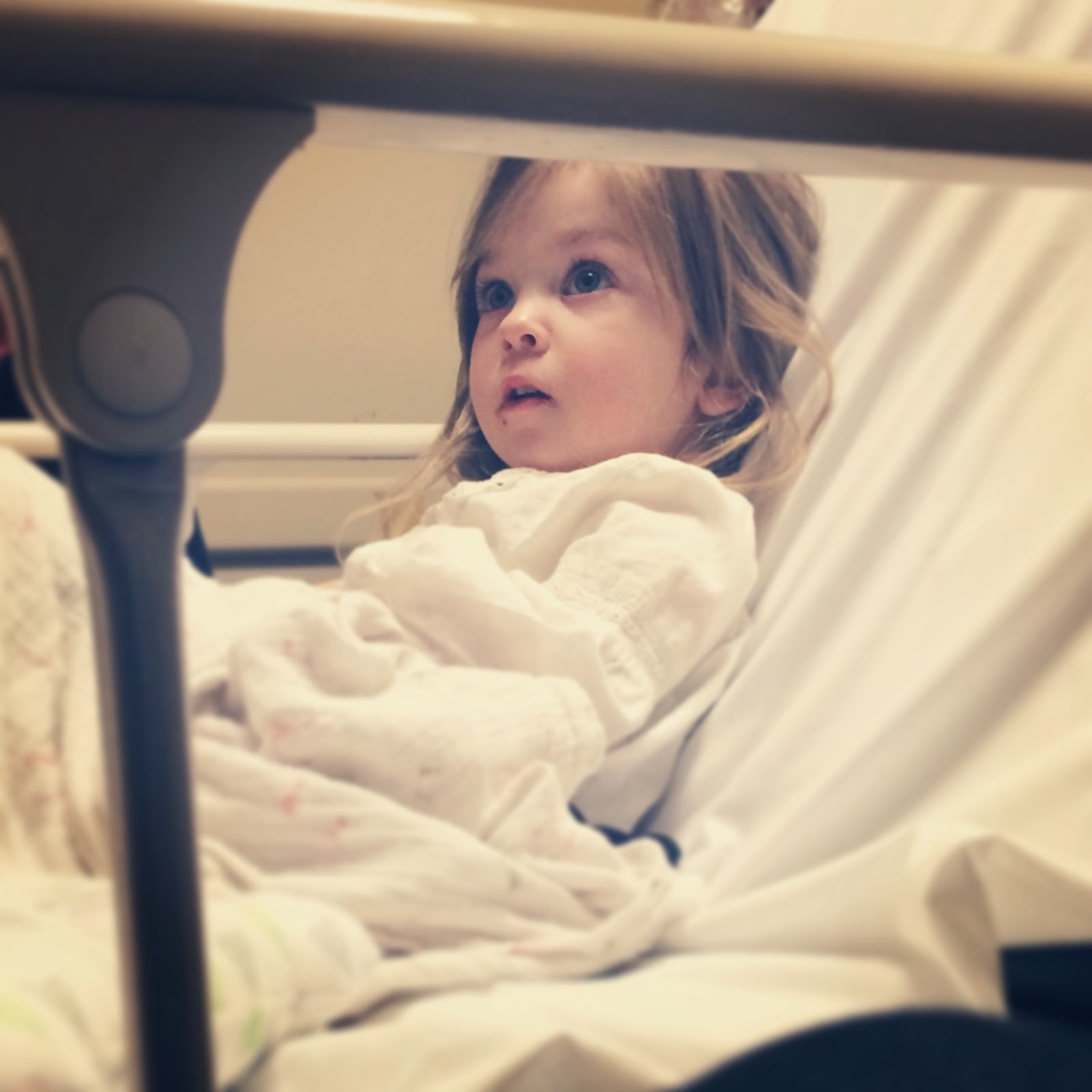